Right to the city 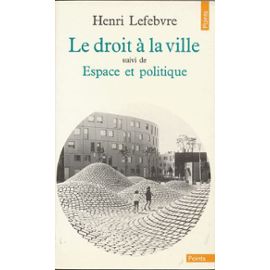 The right to the city is an idea and a slogan that was first proposed by Henri Lefebvre in his 1968 book Le Droit à la ville.

Lefebvre summarizes the idea as a "demand...[for] a transformed and renewed access to urban life".

Lefebvre has an idea of space that encompasses perceived space, conceived space, and lived space. He believed that the everyday concrete environment we live hinges on our mental representations of the space as well as our social relations within that space. Thus, for him, city planning was not the singular placement of material space within a city, but the consequences of these material spaces in the urban life.

Two central themes in Lefebvre’s work are the idea of the city as an “oeuvre” (a collective artwork) and appropriation within a city. Lefebvre considered a city actively shaped by the people within it through participating in public life and appropriation of time and space in the city. By appropriation, Lefebvre meant that everyone should have the inalienable right to use all spaces within the city for his or her daily life. He believed that the appropriation of the space was more important than who owned the actual space, thus prioritizing use value over economic value. He believed there was a centrality to space, where inner cities should be the epicenter of all interaction and creativity.

Lefebvre’s idea of the “right to the city” has been integrated into modern, urban movements as a plea for a new kind of urban politics and a critique on urban neoliberalism. The most common modern interpretation of his concept comes from David Harvey in his article “The right to the city,” which argues that the right to the city is not a privilege that already exists, but an ongoing, collective struggle people face to produce and create life within the city and decide the kind of urbanization they want

From David Harvey, "The Right to the City":

"The right to the city is far more than the individual liberty to access urban resources: it is a right to change ourselves by changing the city. It is, moreover, a common rather than an individual right since this transformation inevitably depends upon the exercise of a collective power to reshape the processes of urbanization. The freedom to make and remake our cities and ourselves is, I want to argue, one of the most precious yet most neglected of our human rights."

A number of popular movements have incorporated the idea of the right to the city into their names or programs:

More recently, scholars have proposed a 'Digital Right to the City', which involves thinking about the city as not just bricks and mortar, but also digital code and information.

Retrieved from "https://housing.wiki/w/index.php?title=Right_to_the_city&oldid=2605"
Cookies help us deliver our services. By using our services, you agree to our use of cookies.