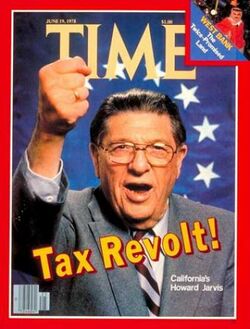 Proposition 13 backer Howard Jarvis, 1978
Proposition 13 (officially named the People's Initiative to Limit Property Taxation) was an amendment of the Constitution of California approved by voters in 1978, by means of voter direct initiative. Key provisions were:

Provisions of the legislation [edit source]

Section 1. (a) The maximum amount of any ad valorem tax on real property shall not exceed one percent (1%) of the full cash value of such property. The one percent (1%) tax to be collected by the counties and apportioned according to law to the districts within the counties.

Proposition 13 declared property taxes were to be assessed their 1975 value and restricted annual increases of the tax to an inflation factor, not to exceed 2% per year. A reassessment of the property tax can only be made a) when the property ownership changes or b) there is construction done.

The state has been given the responsibility of distributing the property tax revenues to local agencies.

In addition to decreasing property taxes and changing the role of the state, the initiative also contained language requiring a two-thirds (2/3) majority in both legislative houses for future increases of any state tax rates or amounts of revenue collected, including income tax rates and sales tax rates.
It also requires a two-thirds (2/3) vote majority in local elections for most local governments proposing to increase special taxes. Proposition 13 received an enormous amount of publicity, not only in California, but throughout the United States.

There are several accounts of the origins of Proposition 13. The evidence for or against these accounts varies.

One explanation is that older Californians with fixed incomes had increasing difficulty paying property taxes, which were rising as a result of California's population growth, increasing housing demand, and inflation. Due to severe inflation during the 1970s, reassessments of residential property increased property taxes so much, that some retired people could no longer afford to remain in homes they had purchased long before. An academic study found support for this explanation, reporting that older voters, homeowners, and voters expecting a tax increase were more likely to vote for Proposition 13.

Another popular explanation is Proposition 13 drew its impetus from the 1971 and 1976 California Supreme Court rulings in Serrano v. Priest, which somewhat equalized California school funding by redistributing local property taxes from wealthy to poor school districts. According to this explanation, property owners in affluent districts perceived that the taxes they paid were no longer benefiting their local schools, and chose to cap their taxes.
A basic problem with this explanation is that the Serrano decision and school finance equalization were actually quite popular among California voters.

Controversies over growth and corruption in public sector[edit source]

Another explanation that has been offered is that spending by California's government had increased dramatically during the years prior to 1978, and taxpayers sought to limit further growth. The evidence supporting this explanation is limited, as there have been no studies relating Californians' views on the size and role of government to their views on Proposition 13. However, it is true that California's government had grown. Between 1973 and 1977, California state and local government expenditures per $1000 of personal income were 8.2 percent higher than the national norm. From 1949 to 1979, public sector employment in California outstripped employment growth in the private sector. By 1978, 14.7 percent of California's civilian work force were state and local government employees, almost double the proportion of the early 1950s.

In addition, during the early 1960s, there were several scandals in California involving county assessors. These assessors were found rewarding friends and allies with artificially low assessments, with tax bills to match. These scandals led to the passage of AB 80 in 1966, which imposed standards to hold assessments to market value,  which caused a large number of California homeowners to experience an immediate and drastic rise in valuation, simultaneous with rising tax rates on that assessed value, only to be told that the taxed monies would be redistributed to distant communities. The ensuing anger started to form into a backlash against property taxes which coalesced around Howard Jarvis, a former newspaperman and appliance manufacturer, turned taxpayer activist in retirement.

Proposition 13 alters the balance of the housing market because it provides disincentives for selling property, in favor of remaining at the current property and modifying or transferring to family members to avoid a new, higher property tax assessment.

California has more rigidity and friction in both its housing market and in renting than other states; one study comparing California's market to that of other states found that between 1970 and 2000, tenure of owned homes increased by 10% and in renting by 19%, and attributed this change to Proposition 13.Other studies have found that increased tenure in renting can be attributed in part to rent control  D.R. Mullins states that “prospects of increased property tax liabilities triggered by residence or business location changes likely constrain mobility and filtering in the housing and property markets.”

Moreover, evidence shows that because homeowners would allegedly keep their homes for longer, young households often rent for longer before buying a house. Because Proposition 13 could be a disincentive to sell, there is less turnover among owners near the older downtown areas, resulting in an upward pressure on price appreciation in these areas.

California also has high rates of migrants from other countries and states,which has contributed to more demand for housing, and it has low amounts of moderately priced housing due to the increased property tax liability after a sale.In effect, because the different tax treatment makes real estate more valuable to the current owner than to any potential buyer, selling it makes no economic sense.

Other taxes created or increased[edit source]

Local governments in California now use imaginative strategies to maintain or increase revenue due to Proposition 13 and the attendant loss of property tax revenue (which formerly went to cities, counties, and other local agencies). For instance, many California local governments have recently sought voter approval for special taxes such as parcel taxes for public services that used to be paid for entirely or partially from property taxes imposed before Proposition 13 became law. These public services include: streets, water, sewer, electricity, infrastructure, schools, parks, police protection, firefighting units, and penitentiary facilities. Provision for such taxes was made by the 1982 Community Facilities Act (more commonly known as Mello-Roos). Sales tax rates have also increased from 6% (pre-Proposition 13 level) to 8.25% and even higher in some local jurisdictions.

This subsequently led to the passage of California Proposition 218 in 1996 ("Right to Vote on Taxes Act") that constitutionally requires voter approval for local government taxes and some nontax levies such as benefit assessments on real property and certain property-related fees and charges.

this article is editable in box below, or by editing this Google Doc. <gdoc id="11Qatrl5XkCPFe9FN5u1I6UkGlJg-cgIxx9EqJbTfd0M"></gdoc>

Retrieved from "https://housing.wiki/w/index.php?title=Proposition_13&oldid=2700"
Categories:
Cookies help us deliver our services. By using our services, you agree to our use of cookies.