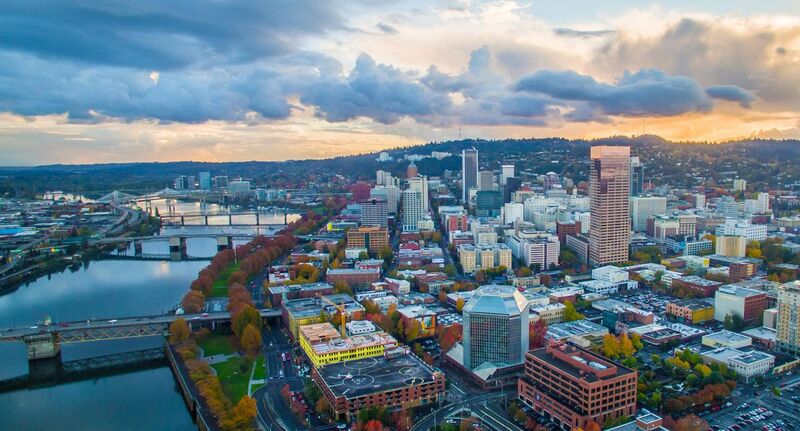 Portland is the largest city, cultural/commercial hub, and major port of the state of Oregon. Its population in 2017 was 647,800 within city limits, 2,425,000 in the Portland metropolitan statistical area (MSA), and 3,160,488 in the combined statistical area (CSA). Portland is located at the north end of the Willamette (pronounced "will-AM-it") Valley, where the Willamette river confluences into the Columbia River that separates Oregon from Washington state. Roughly 60% of Oregon's population resides within the Portland metropolitan area.

See the Oregon section of Politics, Elections, and Legislation for additional information.

The government of the City of Portland consists of an elected City Council which consists of the Mayor, four Commissioners, and an auditor. Each of these officials is elected city-wide for a four-year term. The Commissioners, who are elected city-wide, oversee portfolios, termed bureaus, which can consist of City departments and programs, assigned to them by the Mayor. The Portland City Commission [the City's governing body, also called the City Council] as a whole is responsible for approving and adopting the city budget, levying taxes and making or amending city laws, policies and ordinances. As of this writing, the next Portland municipal election is scheduled for May 15, 2018.

The neighborhood associations are further collected into seven geographically-grouped district coalitions (with two exceptions, Healy Heights and Lloyd District) through which the City's funding flows:

Resident-led advisory boards and commissions, appointed by members of the City Council following an application process, also play a critical part in the governing of the city. These bodies review, debate, and comment upon city policies and legislation and make recommendations to the City Council.

Of relevance here are the following:

The Greater Portland area (including the City proper)  is further administered as a region by Metro, the United States' only directly elected metropolitan planning organization. Metro is a chartered organization that was put in place via state-wide ballot measure in the late 1970s. Metro's structure includes a council-president elected region-wide, an auditor (also elected region-wide) and six councilors elected by district. Portland is represented by four of Metro's districts/councilors (the organization serves twenty-five municipalities in Multnomah, Washington and Clackamas Counties): Districts 1, 2, 5 and 6.

Metro oversees a 50-year regional growth masterplan (the 2040 Growth Concept) for the Portland metropolitan area that as of this writing (2017) can be characterized as focused on increased density, transit-oriented development.

The Port of Portland represents another layer of regional government. It oversees Portland's port and terminals, marine operations in and around the City, Portland International Airport (PDX) and smaller regional airports as well as several industrial parks. The Port of Portland is managed by a nine-member commission, whose members are appointed (for four-year terms) by Oregon's Governor and approved by the State Senate.

The County is administered by an elected commission that consists of a Chair, four Commissioners, the District Attorney, the Sheriff and an auditor. The County government includes a circuit court. Appointed officials fill its Finance, Elections, and Surveyor roles.

Much of the legislation that relates to housing, transportation, development and land use in Portland is ultimately determined at the state level, in the state legislature in Oregon's capital, Salem.

Retrieved from "https://housing.wiki/w/index.php?title=Portland,_Oregon&oldid=3093"
Categories:
Cookies help us deliver our services. By using our services, you agree to our use of cookies.