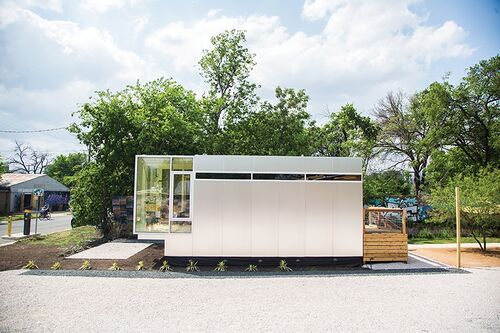 The idea is that cities, especially US cities, typically have large numbers of free parking spaces that are often unused, or in any case arguably mis-priced. Cities usually also have parking management programs for their parking on public land, e.g. streets, that create zones and rules, and issue different types of permits for parking use (police/emergency, special event, Resident Parking Permit programs, commercial vehicle, etc).

What if cities extended their parking management programs to create a "Parking Dwelling Permit" (PDP) program, in which certain parking locations might be marked as allowing or requiring such PDPs?  PDPs might work as follows:

While parking areas are, of course, not usually zoned "residential", such zoning technically only limits residential-type buildings in those locations. Vehicles or vehicle-dwellings such as on-trailer homes are not legally buildings. What usually prohibits vehicle dwelling, if it is prohibited, are municipal ordinances that forbid or limit it, and these ordinances could be amended to create an exception for Parking Dwelling Permit cases.

various cities have or are considering Safe Parking programs, in which typically a city or non-profit-owned parking lot, or section of, is made available for unhoused vehicle dwellers to park overnight. Usually, and sometimes by requirement of authorizing legislation, there are facilities provided such as bathrooms, showers, or port-a-potties.

Retrieved from "https://housing.wiki/w/index.php?title=Parking_Dwelling_Permit&oldid=6255"
Cookies help us deliver our services. By using our services, you agree to our use of cookies.