Homelessness in the Portland Area 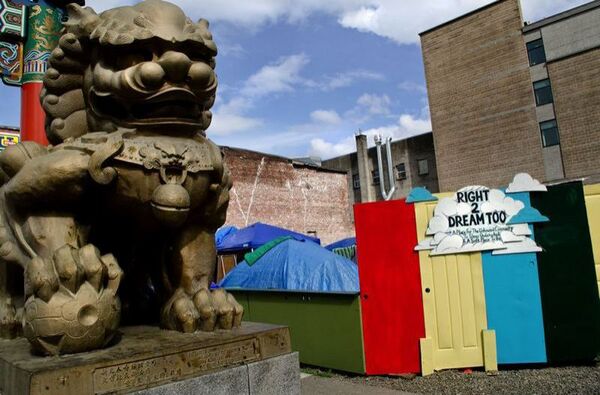 To prepare for the Portland Ideation Summit: Housing for All, organizers pulled together some helpful reading material. This is just the tip of the iceberg, and you are encouraged to explore as widely as possible. Many teams are working hard, all across the region – this is just a sampling.

Right 2 Survive – dedicated to teaching about and defending the human, civil and constitutional rights of people experiencing houselessness.

Dignity Village – membership-based community in NE Portland, providing shelter off the streets for 60 people a night since 2001. It’s democratically self-governed with a mission to provide transitional housing that fosters community and self-empowerment– a radical experiment to end homelessness.

Hazelnut Grove – an organized homeless camp on a patchwork of public and private land in the Overlook neighborhood.

Kenton Women’s Village – a creative, collaborative year-long pilot project, offering a new potential approach for addressing houselessness at a small scale, which could be adapted and implemented in communities across the country. Designed by the Center for Public Interest Design – (CPID) is a research [+action]center at Portland State University that aims to investigate, promote, and engage in inclusive design practices that address the growing needs of underserved communities worldwid­­e.

StreetRoots – creates income opportunities for people experiencing homelessness and poverty by producing a newspaper and other media that are catalysts for individual and social change. See their recent article “Life after prison: Portland residents’ stories”.

Transition Projects – delivers life-saving and life-changing assistance to some of Portland’s most vulnerable residents.

Central City Concern – provides a unique set of resources, from housing and healthcare to peer support and employment. See their Housing is Health project.

Rose Haven – a sanctuary from the street, offering compassion, practical assistance and community to women and children facing loss of home, abuse and other disruptive life experiences in Portland.

New Avenues for Youth – dedicated to the prevention and intervention of youth homelessness.

Outside In – helps homeless youth and other marginalized people move towards improved health and self-sufficiency.

Q Center – a safe space to support and celebrate LGBTQ diversity, equity, visibility and community building. See their report: Nationwide more than 40% of homeless and runaway youth identify as LGBT.

P:ear –  provides 5 main areas of service to homeless youth: safe space, education, art, recreation, transition and food. These programs and services are provided by the five staff, and 120 volunteers.

JOIN – supports homeless individuals and families to transition out of homelessness into permanent housing. Their work are directed at individuals sleeping outside or in their car in the Portland Metro area.

IRCO/Africa House – serves more than 5,000 community members from 22 ethnic and cultural backgrounds each year and is staffed by a multicultural team representing 17 ethnicities and speaking 10 languages.

Sisters of the Road – a nonprofit Cafe in Portland’s Old Town neighborhood working to create systemic change that will end poverty and homelessness forever by providing nourishing meals in a safe, dignified space.

Prosper Portland – focuses on building an equitable economy, invests financial and human capital to serve the city and its residents.

Portland for Everyone – 1000 Friends of Oregon – a coalition of community organizations, individuals, and local businesses that support those land use policies that will help provide abundant, diverse & affordable housing options in all of Portland’s neighborhoods.  Check out their Blog and their article “Every month Portland’s infill rules aren’t changed, the city looks more like this” and “Cottages – a new way” – good stuff.

The Guardian – “Outside in America Series: On the frontline of the homelessness crisis in the western US”.

The Guardian – “Bussed out – How America Moves its Homeless” – Has very informative graphics.

Portland Tribune – A listing of articles on homelessness.

Portland Tribune – When inmates leave prison, the battle to stay out begins (2015) – Over half the prisoners released from Oregon prisons are released to homelessness, according to a recent report.

The Oregonian – A listing of articles on homelessness.

Willamette Week – A listing of articles on homelessness.

Oregon Public Broadcasting – A listing of programs on homelessness.

The Skanner – Homeless Deaths in County Reached 80 in Recent Review

Homeless Shelter Directory (see national map of resources) – a listing of homeless shelters and services for the needy.

Joint Office of Homeless Services – established in 2016 to oversee the delivery of services to people experiencing homelessness in Multnomah County. The office represents a shared commitment between Multnomah County and the City of Portland to making services easier to access for those in need. Lots of news on this site.

YIMBI wiki – a knowledge base for YIMBY (Yes In My Backyard) and housing issues; to gather ideas, research, and strategies for creating more inclusive, affordable, equitable housing and communities. We are an affiliate project of YIMBY Action, which is a member of the SFYIMBY coalition, San Francisco.

Just a sampling of what’s out there. Lets build this resource!

Rainier Yurts – Rainier’s roots go back to the Alaskan Gold Rush. Founded in 1896, and began building yurts in 2004.

Shipping Containers – Nearly 60,000 people experience homelessness on a given night in Los Angeles County, a 23% increase from last year.