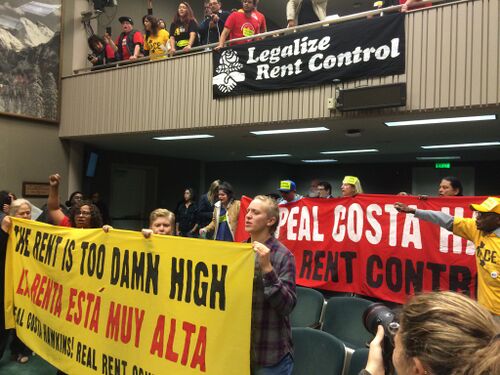 In California, rent control laws are enacted by municipalities, and as of 2018 about 15 of the 482 have done so.

In the key Jan 11 Hearing at Housing and Community Development Commitee, it failed to receive the necessary majority vote to be passed out of committee.

A similar measure was proposed as legislative bill AB 1506, filed in 2017, but this failed to pass out of the housing committee in a vote on 11 January 2018.

Text of Initiative (from Ballotpedia).

Alliance of Californians for Community Empowerment[edit]

"The Alliance of Californians for Community Empowerment (ACCE) Action is a grassroots, member-led, statewide community organization working with more than 10,000 members across California. ACCE is dedicated to raising the voices of everyday Californians, neighborhood by neighborhood, to fight for the policies and programs we need to improve our communities and create a brighter future."
http://www.acceaction.org/about.  @CalOrganize

North Bay Assemblyman Jim Wood on why he declined to vote AB1506 repeal bill out of Housing committee:
"I am not confident that a complete repeal of #CostaHawkins is the answer. I’m concerned that this bill does nothing to facilitate an increase in the supply of housing..."  via @KQEDnews

General arguments for and against rent control[edit]

"The rental-accommodation market suffers from information asymmetries and high transaction costs. Typically, a landlord has more information about a home than a prospective tenant can reasonably detect. Moreover, once the tenant has moved in, the costs of moving again are very high. Unscrupulous landlords could conceal defects and, if the tenant complains, threaten to raise the rent at the end of the lease. With rent control, tenants can request that hidden defects, if they exist, be repaired to comply with building code requirements, without fearing retaliatory rent increases. Rent control could thus compensate somewhat for inefficiencies of the housing market."

By limiting the extent to which landlords can raise rent on purportedly depreciated property, rent control restores balance to tax benefits otherwise received primarily by homeowners and landlords.

"Rent stabilization (for a current tenant) may be considered a basic form of consumer protection: once tenants move into a vacant unit at market rents they can afford and establish lives in these homes, they won't have to renegotiate. Without rent regulation, landlords can demand any amount and tenants must either pay or move. Thus, tenants can become vulnerable to arbitrary and extortionate increases above market value."

The Socialist International argues that housing is a positive human right[34] that equals or exceeds the property rights of landlords.

[LAO 2016]:
"The state’s shortage of housing also presents challenges for expanding rent control policies. Proposals to expand rent control often focus on two broad changes: (1) expanding the number of housing units covered—by applying controls to newer properties or enacting controls in locations that currently lack them—and (2) prohibiting landlords from resetting rents to market rates for new tenants. Neither of these changes would increase the supply of housing and, in fact, likely would discourage new construction."

Kenneth Stahl‏ @kookie13 12:20 PM - 11 Jan 2018
what's the point of repealing C-H if landlords can just convert to condos?
Don't we need to amend the Ellis Act to limit condo conversion before repealing C-H?

"Requiring landlords to charge new tenants below–market rents would not eliminate this competition. Households would have to compete based on factors other than how much they are willing to pay. Landlords might decide between tenants based on their income, creditworthiness, or socioeconomic status, likely to the benefit of more affluent renters."
- [LAO 2016].

'Lock-in effect': rent control incents people to stay in a home longer than they otherwise would
[edit]

"Households residing in affordable housing (built via subsidized construction or inclusionary housing) or rent–controlled housing typically pay rents well below market rates. Because of this, households may be discouraged from moving from their existing unit to market–rate housing even when it may otherwise benefit them—for example, if the market–rate housing would be closer to a new job. This lock–in effect can cause households to stay longer in a particular location than is otherwise optimal for them."
- [LAO 2016].

"Declining Quality of Housing. By depressing rents, rent control policies reduce the income received by owners of rental housing. In response, property owners may attempt to cut back their operating costs by forgoing maintenance and repairs. Over time, this can result in a decline in the overall quality of a community’s housing stock."

Should these rent-control aspects be determined by the state or local governments?[edit]

“At the same time, while I understand why some want to put this change on the ballot, it is never ideal to address a complicated issue like this through the initiative process,” Bloom said.  “First and foremost, the initiative process is a simple up or down vote that does not allow for any public input, shuts down dialogue amongst stakeholders, and prevents anyone from making changes to address any concerns raised by those impacted by the proposal. “Secondly, if there are unintended consequences down the road that need to be fixed, it will require a 2/3 vote of each house of the Legislature – a threshold not easily achieved.  For these reasons, something this complicated is better left to the legislative process. AB 1506 remains a vehicle for responsible dialogue and, I hope, legislation that will ease the economic burden that is affecting so many Californians.”
- quoted in


East Bay For Everyone:
"we support a rolling phase in period for rent control of, for example, 10 years after the issuance of an occupancy permit, so that rent control does not render new homebuilding economically infeasible."
In support letter for AB1506.  See [East Bay for Everyone, 2017].

alon_levy‏ @alon_levy 2:02 PM - 11 Jan 2018
Replying to @IDoTheThinking
"Alternative: tie SB 827 with a statewide ban on rent control. All of today's RC units become market-rate at an integer # of tenancy years."

Belmont Renters‏ @BelmontRenters 3:54 PM - 11 Jan 2018
Replying to @MarcSteinorth
"What about rent control on buildings that are 20 years old? Payback period for new construction is rarely longer than 10 years."

matthewplan‏ @matthewplan 1:10 AM - 12 Jan 2018
Replying to @weel @VamonosLA
"The argument is let different cities make their own policies and not let Costa Hawkins tie hands. Though there likely should be some year limit - 25 years after construction - to ensure new construction isn’t impacted."

Henry Fung‏ @calwatch 10:39 AM - 11 Jan 2018
Replying to @elpaavo
"Would discourage rentals to poor, create cliff effects, etc. If you wanted this, then broaden rent subsidies and fund it with general taxation."

Shane Phillips‏ @shanedphillips 11:07 AM - 11 Jan 2018
Replying to @elpaavo
"One big challenge would be landlords -- seems like it'd give VERY strong incentive to avoid lower income people, since the savings to renters come out of the owners' pockets."

Pedro‏ @peterpedroson 12:08 PM - 11 Jan 2018
Replying to @elpaavo
"I think means testing would remove the middle class as a constituency for maintaining RC"

Paavo Monkkonen @elpaavo
I meant upzoning + rent control, both would be free! and one would even generate $$$

Dragonfly on Deck @IDoTheThinking 1:25 PM - 11 Jan 2018
"Tie the #RepealCostaHawkins bill with SB 827 so that they can work off each other. Subsequent votes."

Brian Hanlon  @hanlonbt 1:47 PM - 11 Jan 2018
Replying to @TribTowerViews @IDoTheThinking
"SB 827 is going to be hard enough to pass as it is. Tenant advocates couldn't even get Costa Hawkins reform out of the policy committee chaired by its coauthor. SB 827 dies if we pair CH reform with it."

Victoria Fierce, legal anarchist‏  @tdfischer_ 1:59 PM - 11 Jan 2018
Replying to @hanlonbt @cjg2127 and 2 others
"This yimby also would love nothing more than pair CH with SB827 in a way that addresses all of the concerns about housing supply brought up in committee today such that everything passes and the fauxgressives get peeled off of the leftist/nimby nightmare coalition."

Dragonfly on Deck‏  @IDoTheThinking 2:32 PM - 11 Jan 2018
Replying to @tdfischer_ @hanlonbt and 2 others
"Pair them only in the sense that they both are voted on within close timeframes. It wouldnt be wise to actually couple those bills into 1 legislation. Right wing Homeowner associations are stronger than crazy peeps with blogs."


Housing For LA  @housingforla 12:53 PM - 11 Jan 2018
More Housing For LA  Retweeted Matt Levin
"California Apartment Association doing exactly what I wrote in my article yesterday (open to negotiating on 1995 provision). There is a grand bargain package out there. Californians will figure it out together."

Matt Levin @mlevinreports 12:53 PM - 11 Jan 2018
"Bloom making point that after committee vote you can still change bill in debate. CAA says it may be open to negotiating on 1995 provision."


alon_levy‏ @alon_levy 2:02 PM - 11 Jan 2018
Replying to @IDoTheThinking
"Alternative: tie SB 827 with a statewide ban on rent control. All of today's RC units become market-rate at an integer # of tenancy years." 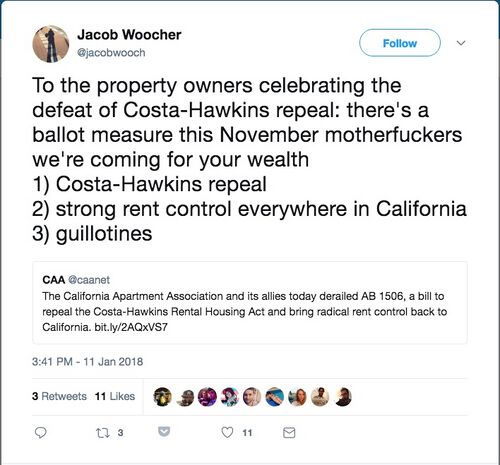 Retrieved from "https://housing.wiki/w/index.php?title=Costa-Hawkins_Rental_Housing_Act_reform&oldid=4104"
Cookies help us deliver our services. By using our services, you agree to our use of cookies.