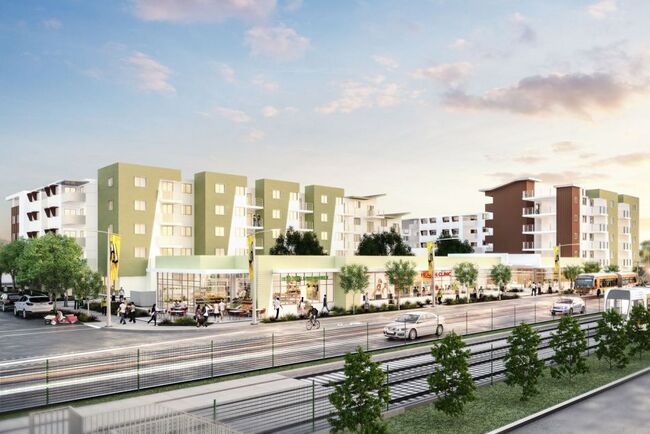 Affordable housing is generally defined as housing which a given household or population is deemed able to afford, such that housing costs take up no more than some percentage, say 30%, of the household’s income. Costs usually include rent or mortgage payments, insurance, taxes, and utilities, and may in some analyses include transportation costs. Typically, affordable housing refers to that affordable to median- or lower-income households.

"The conventional 30 percent of household income that a household can devote to housing costs before the household is said to be 'burdened' evolved from the United States National Housing Act of 1937. This Act created the public housing program, a program that was designed to serve those 'families in the lowest income group.' Income limits rather than maximum rents were established for family eligibility to live in public housing; that is, a tenant’s income could not exceed five to six times the rent. By 1940, income limits gave way to the maximum rent standard in which rent could not exceed 20 percent of income – in practice, the same as the predecessor income limit standard.

"The Housing Act of 1959 maintained maximum rents, but it also gave local public housing authorities more autonomy in establishing them. By 1969, the escalation of rents by public housing authorities struggling to meet spiraling operation and maintenance costs nearly nullified the purpose of the public housing program established in 1937 to serve the nation’s neediest. To reverse this, the Brooke Amendment (1969) to the 1968 Housing and Urban Development Act, established the rent threshold of 25 percent of family income; that is, a family would be required to pay one-quarter of its income in rent. By 1981, this threshold had been raised to 30 percent, which today remains the rent standard for most rental housing programs.

"Because the 30 percent rule was deemed a rule of thumb for the amount of income that a family could spend and still have enough left over for other nondiscretionary spending, it made its way to owner-occupied housing too. Prior to the mid 1990s the federal housing enterprises (Fannie Mae and Freddie Mac) would not purchase mortgages unless the principal, interest, tax, and insurance payment (PITI) did not exceed 28 percent of the borrower’s income for a conventional loan and 29 percent for an FHA insured loan. "
- [Schwartz 2006]

In some contexts, particularly in the United States, "Affordable housing" is sometimes used to mean housing units which by regulation may be offered or occupied or sold only to households within certain income ranges, or for which residents pay only up to some maximum percentage of their income. These units may have been built, acquired, leased, or designated (as in on-site inclusionary housing) for this purpose. They may be permanently so regulated, or for a given time (say 45 years from construction), or limited time but get extended by later agreement.

In this usage, "Affordable housing" is often presented as the opposite of market-rate housing. However, this may be misleading, since market-rate housing may also be affordable in the general sense -- all housing is affordable to someone -- or be made affordable to lower-income households via use of a housing voucher or other income based housing benefit, or by dropping in price over time (a historically typical phenomenon, known as filtering).

This type of housing might at times be referred to as subsidized housing, but this also is likely misleading, because most housing, including market-rate housing, is subsidized in some way. By far the largest areas of housing subsidy (in the broad sense of the term) in the United States are the mortgage interest deduction and other tax benefits for homeowners, which

To avoid confusion with the general meaning of the term "affordable housing," the category of housing here called Regulated Affordable Housing may also be termed:

Also, confusion may be avoided by using the noun "affordability," describing (usually) the main issue itself, rather than "affordable housing," which often describes a type of housing development, which is only one approach to addressing the issue.

"Affordable housing" implies a question of, affordable to whom? Typically, AH programs specify eligible population groups based on some type of area median income.

US Federal (Department of Housing and Urban Development) definitions:

San Francisco additional categories, which are considered within the category of "Affordable housing" as defined for the city Affordable Housing Bonus Program.

Commonly, a household's ability to afford housing is based on gross income (before taxes), although it is sometimes recognized that households wealth (assets) may be important also, particularly for home ownership; also, credit rating and other factors which can create barriers to access.

How much is affordable?[edit source]

As opposed to "Affordable housing" which may refer to types of housing and be understood variously, "Affordability" refers to the problem itself and metrics to measure it.

residual income approach that suggests that costs other than housing, such as child and healthcare and transportation be factored into affordability measures.

While traditional perspectives on affordable housing have focused on income to housing cost ratios alone, a transit-oriented view has been gaining in popularity among those focused on housing affordability (Haughey and Sherriff, 2010). The latter view shifts emphasis from simply creating "cheap" housing to addressing the holistic needs of low and moderate-income residents by locating inexpensive housing near employment centers, transit (dependable bus, busways, street cars, light and heavy rail commuter service and subways) and essential services (Haughey and Sherriff, 2010).

- Rent: usually set at 30% of monthly adjusted income, regardless of income.  Those with zero income pay a nominal amount, such as $25.

- Construction costs paid for by government funds.
- Mostly built between the 1930s and 1970s.

- managed by nonprofit or private business.

- Rent: fixed regardless of tenant income, typically such that a household making 50% AMI pays 30% of their income to rent.

- Usually not affordable to households with income below 50% AMI.

- Construction costs paid for mostly by government funds and tax credits (a mechanism where a company can choose to directly fund housing in lieu of paying taxes).  May also be funded by developer if it's an inclusionary unit within a market rate building.
- Operating expenses covered by rents.

- Most new affordable housing built today falls in this category.

- managed by nonprofit or private business.

- Rent: fixed regardless of tenant income, typically such that a household making 90% AMI pays 30% of their income to rent.

- Usually not eligible for government or tax credit funding.

In Chicago the planning department defines affordable housing as follows:

"Housing affordable to households whose income does not exceed fifty (50) percent of the metropolitan median household income, as determined by the U.S. Department of Housing and Urban Development. Housing must remain affordable continuously for a period of not less than fifteen (15) years to qualify as affordable housing."

"Household" is defined as a person or group of people who expect to live together and share household expenses. Note that in some contexts, it may be common for other people to also contribute to housing expenses and/or to share a physical dwelling -- for example, parents of household members may help pay rent; a household may take in boarder tenants, or share a dwelling unit with other people or households.

Retrieved from "https://housing.wiki/w/index.php?title=Affordable_housing&oldid=613"
Categories:
Cookies help us deliver our services. By using our services, you agree to our use of cookies.