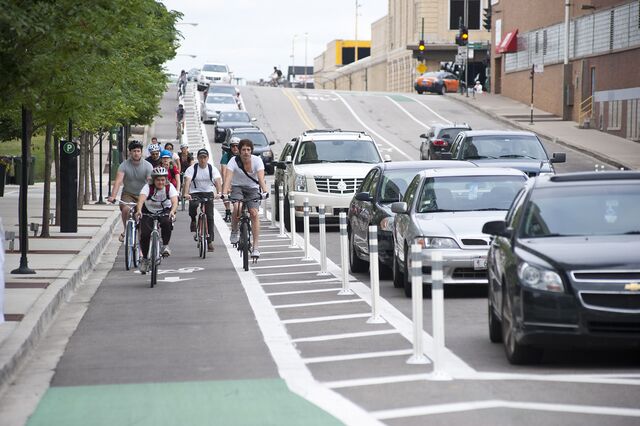 A bikeway is a route, lane, path or trail specifically designed for cycling, such as bike paths, bike lanes and cycle tracks. The term is also often used to denote cycling thoroughfares not available to motor vehicle traffic, although "bikeway" may include shared-use paths utilized by pedestrians, skaters and skateboarders and people in wheelchairs.

Bikeways are usually designated by signage. They may also be marked off from or physically separated from other kinds of traffic by features such as concrete barriers, fencing, and bollards.

Thoroughfares for bicycles are essential to establishing cycling as a highly accessible mode of sustainable transportation and are a key component of many municipalities and transit authorities' transportation planning.

Bike Northwest is a dense network of bike lanes and multi-use paths in Colorado in and between Boulder and the Denver suburb of Westminster. Perhaps this network's most notable thoroughfare is the US 36 Bikeway, a segregated, paved thoroughfare that follows the freeway from Boulder to Westminster and has been touted as "a highway for cyclists."

"The 18-mile US 36 Bikeway runs from Table Mesa Station in Boulder to 80th Avenue in Westminster. The 12-foot-wide Bikeway features protective barriers from motorists, underpasses and wayfinding signage. The US 36 Bikeway ties into local bicycling facilities and connects to the six US 36 RTD Stations and local routes leading to Denver. There is also wayfinding signage to guide bicyclists to existing bike paths and trail systems within the corridor.

Video: US 36 Bikeway Westminster to Boulder

Under Mayor Rahm Emmanuel, Chicago investing in building 100 miles of protected bike lanes. It is the first major US city to have a downtown network of protected bikeways - which have given a boost to its municipal bike sharing system, Divvy, the second largest in the country. In addition to building out its bikeway network, Chicago has also replaced existing bollard-protected bicycle lanes with more substantial concrete barriers. The city has also used its bikeway planning to reconnect historically African-American Bronzeville, previously cut off from it in earlier decades by rail lines with the lakefront via a bridge connecting with the Lakefront Trail.

Portland put in place an innovative bridge over the Willamette River, the Tilikum Crossing that integrates a bikeway with corridors for buses, trains, and pedestrians - while barring cars.

In the 1990s and 2000s, Minneapolis transformed disused railway tracks into the mainlines of an extensive bikeway network that ferries thousands of its residents across town and into the downtown core.

US 36 Bikeway: A Highway for Cyclists - Commuting Solutions